London 2012 icon and symbol of the regeneration of East London

The ArcelorMittal Orbit gave ArcelorMittal an opportunity to showcase the strength and versatility of steel on the world stage. With the involvement of ArcelorMittal businesses from across the world, and the contribution of suppliers in France, the Netherlands and the United Kingdom, the sculpture also serves as a great example of ArcelorMittal’s extensive global logistics network and supply chain. 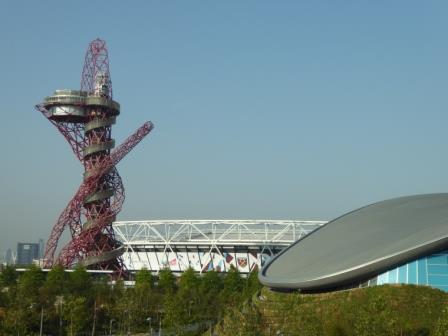 The ArcelorMittal Orbit has a height of 114.5 m

That supply chain became critically important early in the project. Normally the tube maker Condesa would have received the steel for this application from ArcelorMittal’s Bremen mill. However, when the order for the tubes was received from the fabricator in mid-August 2011, it specified that they should contain at least 50% recycled steel. While all new steel contains a considerable portion of recycled content, it was impossible to reach 50% at our Bremen mill.

With delivery of the first coils required by 23 September, ArcelorMittal Projects decided to call on our Sestão mill which operates an electric arc furnace (EAF). An EAF is the most efficient way to convert scrap into molten steel. However, Sestão had never produced the required steel grade (S355J2H) with the properties specified for the ArcelorMittal Orbit.

The facilities at ArcelorMittal Sestão were revamped to produce steel with the toughness and elongation properties required for the sculpture. New process parameters were introduced to control the rolling and cooling temperatures to ensure that the steel had a lower grain size. A low grain size ensures that strength is maintained without compromising the steel’s toughness at a thickness up to 12 mm.

Within two weeks of the order being received at Sestão, the first coils were on their way. The recycled content was 60%, well in excess of the 50% requested by the London Organising Committee for the Olympic Games (LOCOG).

Condesa’s precision-tube manufacturing plant in France formed the steel into welded tubes before shipping it to Watson Steel in the UK. Watsons designed the connections for the ArcelorMittal Orbit structure, fabricated the different parts, and then assembled the sculpture on-site. The company, which also worked on the Olympic Stadium, was chosen for its experience in producing precision-made steel structures.

The completed ArcelorMittal Orbit sculpture was unveiled at the beginning of May 2012, two months before the Games were due to open. It created a major focal point for the Olympic Park site and was highly appreciated by visitors during the Games.

Although a large part of the ArcelorMittal Orbit sculpture is made of S355J2H steel grade, many other steels were supplied by ArcelorMittal for this project. Steel plates, bars, beams, rods, and wire were used to build the foundations and other parts of the structure.

Indaten® weathering steel panels form the inner core of the structure and were produced by Industeel in Belgium. Thicknesses range from 10 to 20 mm. 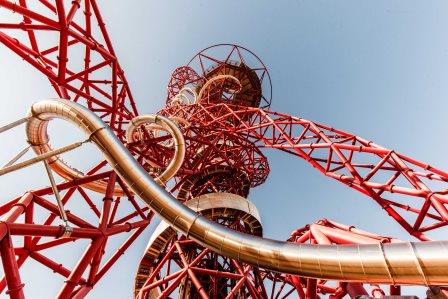 About the ArcelorMittal Orbit 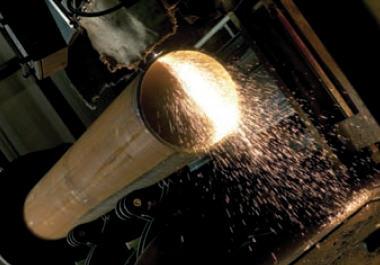 The idea for a sculpture to commemorate the London 2012 Olympic and Paralympic Games came from the then Mayor of London, Boris Johnson, and a design competition was launched for the landmark project. Johnson secured the support of ArcelorMittal during a chance meeting with Chairman and CEO, Lakshmi Mittal at the 2009 World Economic Forum.

The winning entry, designed by Anish Kapoor and Cecil Balmond, was unveiled in March 2010. A sculpture and observation platform, the ArcelorMittal Orbit is located in the southern area of the Queen Elizabeth Olympic Park.

The ArcelorMittal Orbit closed after the 2012 Paralympics to allow the Olympic Park to be reconfigured for long-term public use. The tower’s two indoor viewing platforms reopened to visitors in 2014. In June 2016, the world’s tallest and longest (178-metres) tunnel slide was added to the ArcelorMittal Orbit, ensuring it will continue to attract visitors from around the world for decades to come.

Access to the viewing platforms is via one of two lifts. While visitors may also descend in the lift, many choose to utilise the spiral staircase which winds through the sculpture.

ArcelorMittal’s donation of the ArcelorMittal Orbit to the London Olympics and the people of London resulted in the company being appointed a London 2012 Tier 2 partner. ArcelorMittal was also the official steel supporter of the 2012 Games. 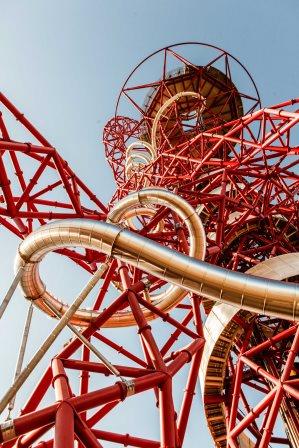 The steel in the ArcelorMittal Orbit weighs as much as 1,136 London black cabs

Are you interested in making art with our steel?