ArcelorMittal at the heart of Ghent’s Champions League dream

Having created football history with their first Belgian title and debut appearance in the UEFA Champions League, KAA Gent, Ghent’s football team, is now gearing up for their clash against German side Wolfsburg.

If you’ll be one of the football aficionados watching the game on 17 February, don’t miss the chance to admire the impressive Ghelamco arena, made with ArcelorMittal steel.

Less than a month from now, the Belgian team will host their opponents in the knockout rounds on a historic night at Ghelamco arena, their multi-purpose 20,000-seat stadium featuring steel from our plants in Luxembourg and Belgium.

“We Are One Family, We Are Buffalo”

“We Are One Family, We Are Buffalo” that is the motto of KAA Gent, Ghent’s football team, whose stadium - the Ghelamco arena - was built with ArcelorMittal’s steel. This multi-purpose stadium of 20,000 seats contains beams from Luxembourg in its roof structure and a steel deck produced in Belgium.

Steel for the roofing structure

The Ghelamco Arena is a multi-functional stadium with room for offices, warehouses, restaurants and retail shops. While its structure is made of concrete and its façade is made of glass; steel, due to its lightness, was the material of choice to build its roofing structure.

The steel canopy built over the grandstand consists of 58 steel trusses of 38 metres. Each rafter weighs about 8 tonnes and is supported by 2 concrete columns. It was built with 600 tonnes of S355 beams provided by Distribution Solutions Belgium and produced by ArcelorMittal Europe – Long Products in Differdange (heavy beams) and Belval (light beams). They were ordered by the contractor ASK Romein to Distribution Solutions Belgium.

ArcelorMittal Europe – Flat Products provided Granite® Standard steel for 237m² of sandwich panels in the color RAL 9005 25µ polyester produced by ArcelorMittal Gent. The steel roofing was supplied by Joris Ide, an important client of ArcelorMittal Gent and was placed by MSB Zelzate.

The canopy of the Ghelamco arena made with our steel

How to win the contract?

The contractor, ASK Romein, is a loyal customer of Distribution Solutions Belgium. As a cross-border company, they have facilities in Belgium and in the Netherlands. Being a long-time partner of the customer was one of the main reasons they chose ArcelorMittal’s steel.

Another factor was the location of our stocks. Our beams were located in Antwerp, which was also the location of the customer. Thanks to that, we could provide a large amount of high quality beams in a just-in-time delivery process, which allowed the customer to mount the different parts one after the other.

Timeline of the project

Our steel preferred over aluminium

Next to the stadium the architects also designed two office towers and the Brico Plan-It store. ArcelorMittal Construction supplied in 2012 around 5,000 m² of Hairplan for the store’s façade. Due to the proximity with the stadium, the customer wanted a very resistant material in case of vandalism, thus choosing steel over aluminium. The panels are coated in Perla 60µ in the colours Sky Perla and Lila Perla that give an iridescent blue-purple effect to the building. 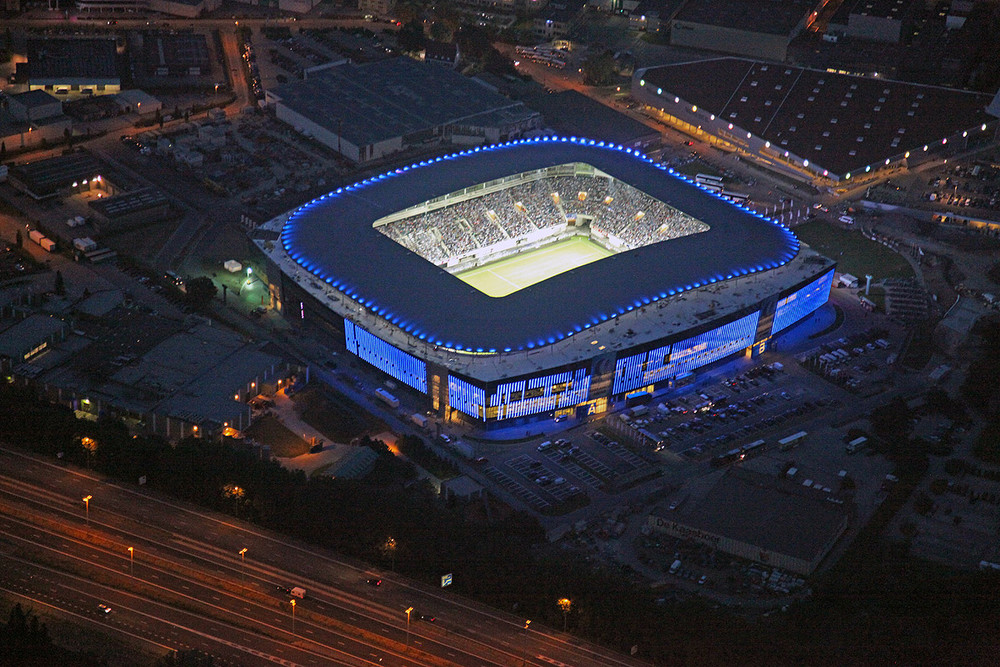 The façade of the Brico Plan-It store, cladded with Hairplan

EMW Stahl Service GmbH and ArcelorMittal are going hand in hand on the road to decarbonization.