ArcelorMittal Méditerranée recently inaugurated a photovoltaic farm on its site of Fos-sur-Mer, realised in partnership with EDF Energies Nouvelles. This solar farm of 15 hectares has a capacity of 12 MWc, equal to the annual electricity consumption of 7,400 citizens, half of the town of Fos-sur-Mer. Profil du Futur, a division of ArcelorMittal Construction, was in charge of the structure’s construction and used Magnelis®, a lead product of ArcelorMittal Europe – Flat Products for solar projects.

La Fossette solar farm is composed of 45,000 solar panels and its full construction required 10 months of work and up to 40 people. The solar panels structure was designed and produced by Profil du Futur in Horbourg-Wihr (near to Colmar, in France) and with steel produced by ArcelorMittal Bremen and coated with Magnelis®.

Based on DMSE’s specifications (the consulting firm mandated by EDF Energies Nouvelles), Profil du Futur proposed a structure designed in accordance with the Eurocodes standards that could meet all the needs (soil condition (determined by the G2AVP study), climatic loads, handling in the ground, modules fixing method etc).

The poles are the first steps in the installation of a solar structure. For La Fossette project, micropiles were the selected method, due to the nature of the ground (rocky with large blocks). This solution involves drilling the soil to a certain depth and to a certain diameter to install the pole and pour concrete into the hole around the pole. Before installing the micropiles, pulling tests are made to check how the poles will hold in the ground.

The photovoltaic modules of La Fossette were manufactured by the company TRINA and to realise the mounting parts which hold the modules on the structure, Profil du Futur partnered with Araymond who designed and manufactured the clamps. 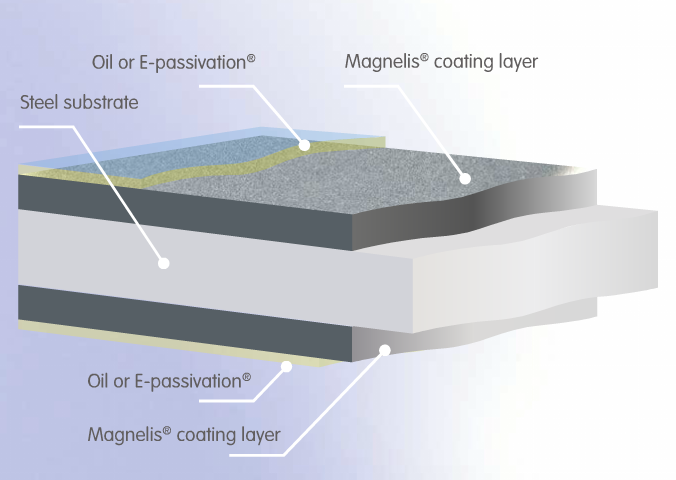 The structure of La Fossette solar farm was entirely made with Magnelis®, an ideal material for solar applications. Its remarkable corrosion resistance comes from its unique composition; developed by ArcelorMittal Europe – Flat Products, the coating includes zinc, 3.5% aluminium, and 3% magnesium. Magnelis® has a self-healing effect on cut edges and scratches which ensures excellent edge protection, even in the most hostile environments. When exposed to the environment, Magnelis® forms a very dense, zinc-based protective film. This film also forms on edges, welds, perforations, and scratches. It is almost impossible for the environment to penetrate this film.

La Fossette is the first project that EDF Energies Nouvelles realises with Magnelis®. Since 2012, Profil du Futur has made continuous efforts to make Magnelis® known as a suitable product for solar applications. This prescription as well as the 25-year guarantee were key factors which convinced EDF Energies Nouvelles to work with us.

A fruitful collaboration for Fos-sur-Mer

The completion of this project is part of the EDF Group's CAP 2030 strategy, which aims to double its renewable capacity by 2030. For ArcelorMittal Méditerranée, the aim is to facilitate the production of renewable energy by making parts of its industrial lands available. The last 5 years, the company invested €60 million for sustainability and remains attentive to the residents’ remarks.

With 30 years of experience, Profil du Futur is the European leader in structures made of guaranteed cold rolled profiles for metallic construction. Profil du Futur is specialised in design, drawing & manufacturing load bearing units mainly designed for the building industry.

The company realises more than 10,000 quotes for 3,600 projects per year (mainly in Europe) in these four main domains: