When the Karel Doorman enters service in 2015, it will be the largest vessel in the Royal Dutch Navy. A joint logistics and support ship, the Karel Doorman is one of the first of its type in the world. Constructing such a large and complex vessel is a challenge both for the shipyard and the steel supplier. But close cooperation between Damen Shipyard Galati and ArcelorMittal Flat Carbon Europe will ensure the Karel Doorman is delivered on time and on budget!

For the past five years European shipbuilders have been facing challenging times as the industry goes through a difficult economic cycle. The downturn in the global economy has dramatically reduced the amount of goods transported by sea and demand for new ships has fallen as a result. Expansion of capacity and cheaper labour in Asia has seen shipbuilding move eastwards to countries such as China and Korea. This combination of factors has resulted in many European shipyards being under-utilised or going out of business.

In Galati (Romania), Damen’s preferred steel supplier is ArcelorMittal Galati – located just 15 km from the shipyard. The two companies have a long history, working together in the past on vessels such as containers, tankers and naval ships.

At the time the steel supply contract for the Karel Doorman was signed, cost was a major issue for the shipbuilder. Damen did not want to speculate on price variations during the two years it would take to build the vessel. “Damen doesn’t want to benefit from steel price fluctuations,” explains Marius Simion, Director of Purchasing and Logistics. “We just want to keep our people working.”

To ensure there were no surprises, ArcelorMittal agreed to a transparent pricing system based on a neutral public index. This reduced the risk for Damen, and enabled them to be completely transparent with their customer and ArcelorMittal.

The contract also specified the quantities of EH-36 high strength steel (HSS) plate that were to be delivered each quarter. Typically with vessels of this scale, final design and engineering continues as the ship is actually built. The contract enabled Damen to finetune the order as engineering changes were made.

For ArcelorMittal this approach worked very well as it helped to improve internal processes such as production programming. “Having such a contract and good planning has helped to avoid delays,” notes Marius Simion.

Wherever possible, ArcelorMittal delivers heavy plate for shipbuilding via rail wagons. This reduces the number of truck trips required and is the quickest way to get the right volume of steel to the right place at the right time. In the case of the Karel Doorman, the plates were delivered in as-rolled condition and then shot-blasted by the shipyard.

In the summer of 2013 the Karel Doorman will be towed from Galati to Damen’s facility in Vlissingen (the Netherlands) where fit-out will be completed. During 2014 the ship and her systems will undergo final acceptance testing before entering service with the Royal Dutch Navy in 2015. “The client is very happy with the quality to date,” adds Marius Simion.

The project with Damen is just one example of how ArcelorMittal Galati is meeting the high quality and service challenges in the very competitive shipbuilding market.

As the Karel Doorman nears completion, attention turns to new ships – of which Damen has many on its drawing board. “We’ve had a long history with ArcelorMittal and good cooperation on this project, we’re very happy with how it has gone,” says Marius Simion. “We plan to extend that cooperation to new projects.”

With shipyards in the Netherlands and Romania, Damen took the decision to specialise in technical vessels before the worst of the economic recession hit in 2008. By concentrating on building ships such as tugs, workboats, naval, offshore and transport vessels, Damen has carved out a niche for itself in an otherwise difficult and crowded market. Today the company’s 6,700 employees produce around 150 ships per year. 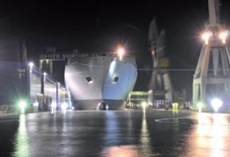 The high strength steel grade EH-36 was selected for the hull of the Karel Doorman. A non-commodity grade, EH-36 retains its properties even at temperatures as low as -30°C. This means the vessel can operate in almost any part of the world.

Damen specified three-metre wide plates to reduce the number of welds required. Wider plates also improve the line of the ship, reducing the number of visible seams in the large mid-section. “For large vessels, the bigger the plate the better,” notes Marius Simion.