ArcelorMittal has been named a Samsung “Best Partner” in recognition of the company’s outstanding collaboration with the multinational corporation, headquartered in South Korea.

ArcelorMittal was recognised at an award ceremony in Poznan, Poland, attended by more than 200 people, including Samsung suppliers from a host of other industries including the glass and plastic sectors.

"It is a testament to our flexibility, speed, and the strength of the cooperation between our facilities – including our steel service centres and our commercial and technical support”.

Samsung and ArcelorMittal started working together in 2010, when Samsung acquired Amica’s Polish factory and assembly line for refrigerators and washing machines.

The following year, Samsung started producing its own fridges and washing machines. This led to a series of homologations – the process of getting approval from an official authority – to have ArcelorMittal steel approved for parts of the machines.

With a target of reaching five million units by 2020, Samsung has ambitious growth plans for the home appliances sector in Europe and relies upon its suppliers to provide sophisticated, tailor-made solutions.

Luczak added: “Working with Samsung has underscored the importance of “investing time in understanding the unique needs of your customer”. 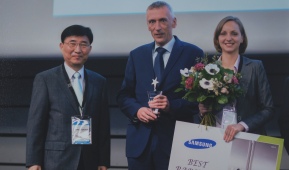