ArcelorMittal has signed a new contract with the Saint-Nazaire shipyard to supply a minimum of 116,000 tonnes of steel for the hulls and decks of three giant cruise ships to be built by STX France, following an initial contract signed with STX France in 2013 relating to the construction of the world’s largest cruise ship, in the "Oasis" class and destined for the Royal Caribbean Cruise Line (RCCL). A new Oasis-class ship will be delivered to RCCL and two other ships to MSC Cruises, which has just embarked on a €5 billion investment programme in order to retain its ranking among the world's four major cruise lines.

The future Oasis-class cruise ship will be 362 metres long and will have a maximum beam of 66 metres. It will have 2700 cabins and will be delivered to the ship owner, Royal Caribbean Cruise Line, in spring 2018. The new Vista-class ships, ordered for MSC Cruises, with a length of 315 metres and a beam of 43 metres, and fitted out with 2250 cabins, will be delivered in May 2017 and April 2019 respectively.

When the contract was signed, Reiner Blaschek, chief marketing officer of ArcelorMittal Europe – Flat Products, Business Division North, said: “We are very proud that our steels have again been chosen by STX France for the construction of some of the world’s most outstanding cruise ships. This demonstrates that steels produced and processed by ArcelorMittal in Europe meet the very high standards of the best shipbuilders such as STX France.”

Bertrand Paquet, senior vice president – Sourcing, STX France, added: “This long-term agreement is a continuation of the partnership already entered into for the supply of the steel required for the construction of the third Oasis-class ship. It is the culmination of a long negotiating process between the ArcelorMittal and STX France teams. We are very pleased, because this agreement enables us to attain the technical and economic performance required for the construction of the cruise ships that we currently have on order.”

Find out everything on our steels in our 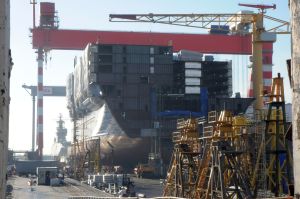