In late 2017, the world’s first floating wind farm will begin producing energy off the east coast of Scotland. The 258-metre high turbines float on the surface of the sea thanks to large steel cylinders which extend around 80 metres below the surface of the sea. The new technology, first demonstrated by the energy firm Statoil in Norway, allows wind turbines to be deployed in deeper waters, vastly increasing the areas available to generate clean energy.

Floating offshore wind farms were only a concept until Statoil successfully demonstrated the technology would work in the Norwegian Sea. The company is now building the pilot floating wind farm which is positioned at Buchan Deep, approximately 25 km east of Peterhead (Scotland).

The five floating turbines that make up the pilot project were produced by Siemens and have a nominal capacity 6 megawatts each. Statoil’s proprietary Hywind pitch controller is integrated into the turbine to mitigate excessive motion. Hywind also minimises energy losses due to aerodynamic or hydrodynamic movements, maximising output from the turbine.

“ArcelorMittal was chosen as the customer appreciates our short delivery times. They also had confidence in the quality of our steels and ability to react swiftly to unexpected challenges which arise in a project of this size and scale,” says Luis Rodríguez Hevia, heavy plate account manager for ArcelorMittal Asturias. “ArcelorMittal Gijón is also close to the customer’s own premises which helps to eliminate delays.”

Each foundation is composed of a series of ring sections with internal reinforcements. They form two watertight compartments and extend 80 metres beneath the sea surface. The lower compartment holds water and rock ballast, and is designed to provide stability in severe weather conditions.

The structure is being floated into position and anchored to the seabed with mooring lines attached to anchors on the seabed. Construction of the foundation structures began at Navantia during January 2016 with the last unit delivered at the end of May 2017. The wind farm is expected to start generating energy by the end of 2017.

Floating structures offer cost-effective clean energy generation in a wider range of locations. While monopile and jacket foundations can be successfully utilised in shallow waters (up to 50 metres deep), floating wind turbines can be deployed in deeper waters such as those found off Europe’s Atlantic coast or in the Mediterranean Sea. The increased flexibility of floating turbines offers a bright new future for clean and renewable wind energy. 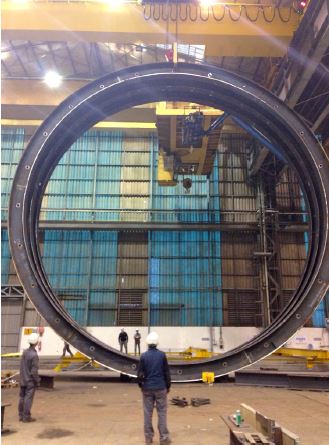